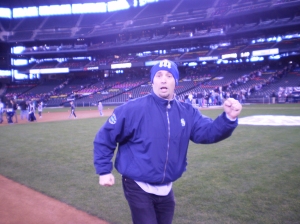 Running the bases at Safeco. Somehow I got on base!

I just watched Moneyball last night. I am very familiar with Billy Beane and the Oakland Athletics. My hometown team, the Seattle Mariners always seemed to have fits playing the A’s during the “Moneyball” years.

I know that “Hollywood” artistic license makes believing all that happened in the move in doubt. What can’t be doubted, however, is the concept of “Moneyball.” The concept is very simple. In order to win games in baseball, the number one key metric is scoring runs. In order to score runs, your players need to get on base. What Beane changed in the old school world of baseball executives and scouts was that he believed that he could find guys who were undervalued by other teams, but had skills to get on base a lot. He knew he could also sign them for virtually no money (in a professional sports definition). Beane was right. He took guys who didn’t exactly seem to fit together in a team, and used several key metrics (especially on-base percentage) to build a team that competed for championships with teams that outspent them by 4-5 times.

How does that apply to you as an insurance agency owner or company executive? You need people who can “get on base.”

You may have a lot of people on your team who pass the “eye test.” They look busy; they move a lot of paper; they work late; they always seem to be the hero. Here’s the problem. Very often, these people create their own inefficiencies. Maybe they spend too much time on social media, at the water cooler, or spending too much time on simple projects. Having too many of these “heroes” ends up meaning you aren’t productive, and you end up overpaying due to extra and overtime hours.

So what do you do? You need to set up metrics for your team. Just like Billy Beane used on-base percentage to evaluate hitters; and you have probably set up metrics for producers; you must do the same for your team. I’m not here to tell you what those metrics should be. You know your organization better. That being said, think outside the box. Maybe one of your metrics should be a different eye-test. Maybe one should be who leaves every night on time with the cleanest desk; with an e-mail Inbox that is caught up; and without a stack of to-dos in their desktop Inbox.

What if everyone on your team could literally walk out the door at 5:00 all caught up every day. How could that change your business?

But, that’s just me…

Note: This is a new blog category for insurance professionals. As part of my 360, you will find a variety of categories on topics in which I work with clients. You may find that topics brought up in these sections apply to everyone.