Take Me Out to the Ballgame

A fun day in Pittsburgh is capped by a day at PNC Park to watch the Pirates battle the St. Louis Cardinals. Below is a copy of my latest blog post for the Kitsap Sun, where I am a community sports blogger. I wanted to share the experience with you…

I went to PNC Park last night to take in the Pirates-Cardinals game. Here are my impressions of the evening…

1 – It’s a beautiful ballpark. A couple years younger than Safeco Field, it has a spectacular view of the downtown skyline in Pittsburgh. It appears to be smaller (fences too) as there is considerably less seating in the outfield than Safeco. That being said, it has a cozier feel. I still like Safeco Field the best, but PNC Park is right there. A great place to watch a game and enjoy.

2 – The Pirates actually won for us with a little help from a couple NW homies. Ryan Doumit (Moses Lake) was the catcher and played well. Evan Meek (Inglemoor HS in Kenmore) picked up the save (even though he gave up a run). He got out of a bases loaded, one out, and Matt Holliday at the plate situation.

Ronnie Cedeno (the former Mariner) played flawlessly at shortstop and made the final out. He also had a double. Lots of other ex-Mariners in the stadium including Ryan Franklin and the now third-string catcher Jeff Clement.

3 – It’s amazing that a guy who has been dead for 37 years is still so idolized. Hall of Famer Roberto Clemente, who died in an airplane crash on December 31, 1973 on a humanitarian mission, had more #21 jerseys than anyone else. The Bucs have memorialized him on the field with a 21-foot right-field wall (where he roamed for 20+ years). Clemente was a legend and continues on in Pittsburgh after nearly 4 decades.

Guys, when you walk in and hang a right into the urinals, you see a huge one-way window. You ge to look out but nobody else can see in. Kind of like NCIS! As you are taking care of your business, you can casually look at all the people in the bar, the myriad of big screen TV’s, and keep tabs on your girlfriend if you need to (I didn’t even have my wife there, so I simply gazed at all the people and activity). Now THAT is a cool men’s room!

BONUS – I forgot to add on my blog for the Sun – it was a thrill to watch a future Hall of Famer Albert Pujols. He went 3-5 with a run scored, however he is sitting on 399 career home runs. I have to admit I was pulling for him to jack one out so I can say I “was there” on that historic event. No such luck.

A very fun evening. That’s what going to baseball games is all about….a wonderful setting with your family, a Pittsburgh cheese steak and beer, a home team win, and a trip to the coolest bathroom ever! 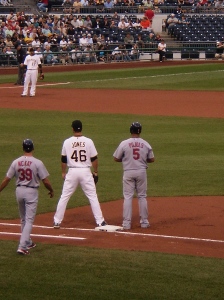 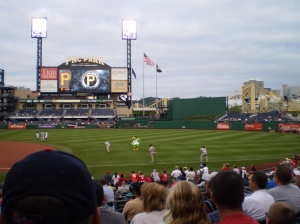